We’re very happy to announce a new tradition here at Olive Drab Journal. Each year we will honor members from the MILSIM community whose actions exemplify the quintessential traits of the warrior, the leader, and the shepherd. This recognition does not come lightly. We look for strong characteristics—something akin to the leadership audacity of Erwin Rommel, the compassion of Mother Teresa, and the teaching of Dale Carnegie. But mostly we look inward amongst our MILSIM community to identify those brilliant men and women whose leadership has been inspirational. 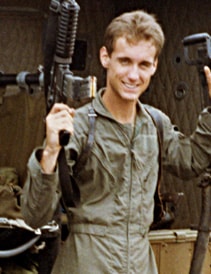 Jeff McGhay was thrust into the Warrior-Shepherd role at the age of fourteen. He helped establish One Shepherd in 1981, years before the term MILSIM or even the name One Shepherd were coined. Intentional or not, Jeff had become a trend setter.

After four years of instrumental work in developing a MILSIM gaming community in northwest Missouri, Jeff graduated West Platte High School and joined the US Army in 1985. He spent six years in service to his nation as an aviation crew chief and door gunner on a UH-1 Huey helicopter. In addition to his assignments in the US and South Korea, Jeff was deployed to Honduras, El Salvador, and to the Mideast serving in the Persian Gulf War in 1991.

Jeff left the Army as an NCO and returned to his hometown to raise his family. He became involved again in the One Shepherd community almost immediately and continued to promote the sport among business contacts and church youth groups. Indispensible to the organization was Jeff’s vision for MILSIM and his rapport with the parents of the younger players.

Due to the demands of raising two daughters with his wife, Sherry, and work, Jeff took leave from the MILSIM community in 2002. He continues to act as a consultant to the One Shepherd community. Jeff’s 21 years of service literally helped pioneer the sport of MILSIM in America’s Midwest, and reflect positively on the US military traditions. For this we recognize him as a Warrior-Shepherd. 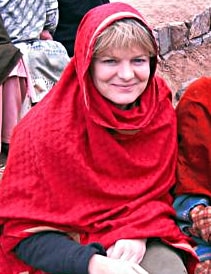 Heather Amstutz transferred to rural northwest Missouri in 1983. Attractive and popular, Heather stepped outside the boundaries of what was considered “normal” activity for a young woman when she joined One Shepherd’s MILSIM games.

Heather remained active in MILSIM for her last two years at West Platte High School and, after graduation in 1985, attended Northwest Missouri State University in Maryville. Missing the camaraderie of One Shepherd, Heather decided to join the Army ROTC program. Four years later in 1989, she was commissioned a Second Lieutenant in the US Army Corps of Engineers.

As a young Army officer, Heather deployed throughout Latin America working civil affairs engineer projects in Honduras, Panama and Costa Rica, often living in tribal regions only accessible by air transport. She later served as the commander of an engineer company while deployed to the Bosnia conflict. Heather was then reassigned to The Pentagon coordinating international command-level meetings until she parted from the military in 1999. Heather went on to earn a master degree in international affairs from Catholic University in Washington, DC and speaks fluent Portuguese and French.

It seems Heather’s military experience was nothing more than a mere dress rehearsal for the real adventure. Working with numerous humanitarian aid programs throughout the world, Heather has been deployed to work in disaster areas and war-torn regions throughout Somalia, Darfur, Ethiopia, Angola, Sudan, Afghanistan, Pakistan, and Indonesia. She is currently working in Africa for Medair Emergency Relief and Rehabilitation.

Though for Heather the MILSIM and military communities are since past, her dedicated service to our nation and her continued ambassadorship of goodwill to our neighbors abroad reflect most positively on the traditions of our community and upon America as a whole. We’re very proud to include Heather in our ranks as a Warrior-Shepherd. 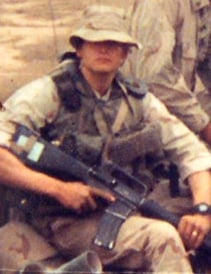 Michael Kengene McGuire first came to One Shepherd prior to his senior year of high school in 1999. Enthusiastic and dedicated to the art of leadership and tactics, Kengene proved to be a natural warrior and leader. He quickly earned the nodding approval of the cadre as a “fast tracker”—showing phenomenal potential.

Kengene remained in the Midwest MILSIM community for only one year before graduating Camdenton High School and enlisting as an infantryman in the US Marine Corps in 2000. Kengene deployed to Operation Iraqi Freedom twice with the 1st Light Armored Recon BN and with Regimental Combat Team 5. He was awarded the Naval Achievement Medal from the Secretary of the Navy for actions in Iraq.

After four years of service to his nation, Kengene decided to remain in the Marine Corps as an NCO and bootstrap for a commission to the officer ranks. He enrolled at the University of Missouri in Columbia under the Navy/Marine ROTC program earning a bachelor degree in business management.

Kengene aptly noted that while the ROTC program had stellar classes and labs on the art of leadership and tactics—the program had no field application of these principles. He approached the One Shepherd community and asked if ROTC cadets and midshipmen could be included in MILSIM training and gaming events. Kengene now functions as One Shepherd cadre and has been instrumental in promoting the value of MILSIM as a means of training application for ROTC.

Kengene will receive a commission as a Marine Second Lieutenant in May of 2008. The youngest of our honored members, Kengene’s service to our nation and our MILSIM community has been enormous for such short period of time. He continues to impress all who work with him, and carries with him the hope and pride of our community. For his generous and professional work with the young men and women of the MILSIM sport, we are very proud to recognize Kengene as a Warrior-Shepherd.

Each of our honored members has found their own path. You will notice that these paths do not reflect the measures of success heralded by the American pop-culture: the most money, the prettiest spouse, the biggest party. As warriors we recognize such measures as “moving targets.” These are elusive and pursued only by fools.

Instead, our honored guests have paved another path of success—commitment to our local, national, and global communities. In doing so Jeff, Heather, and Kengene have set the bar high and challenged all who follow. In honoring them, we must find our own path on the journey to becoming a Warrior-Shepherd.