Participating in MILSIM events over the past couple decades as an observer/controller, I get asked a fair amount of questions on the field. As often as not, those questions could be boiled down to, “Okay, what do I do next?” The answer is always the same. You can attack, defend, or withdraw. In tactical engagements, it pretty much boils down to that.

Now, to be argumentative, one could insist that the bypass, monitor, or suppress are options, too. Fair enough. But unless we’re going to split hairs, these are all acts of moving forward, sitting in place, or withdrawing. Perhaps it would be more convenient to say the options are to move forward, sit still, or leave. You say potato; I say garlic mashed.

The point is to recognize the options and then select the most appropriate course of action (COA). This sort of split-second critical decision-making is the hallmark of seasoned tacticians and teams.

So how do they do it? One place to begin looking for answers is Dr. Gary Klein’s work on the Recognition-Primed Decision (RPD) model. Klein studied the decision-making of fire department captains. His initial hypothesis was that due to the time constraints the fire captains would mentally generate only two or three possible COA. Then, once at the scene of the fire, the captain would select the most suitable COA.

After years of studies involving interviews and on-the-scene observations, Klein adjusted his theory of critical decision-making. In fact, the fire captains usually reserved their COA generation until they actually got boots on the ground at the scene of the fire. Once there, the captains almost categorically considered only one COA. This was an unexpected find.

What it meant was that the fire captains were using their vast experiences to recognize the types, classifications, and causes of each fire to assess the best COA. The captains made their call, perhaps thinking to themselves, “Oh, right. I’ve seen this before. This is like the Smith-Martin Company fire. We’d better use this specific COA.” The captain barks out a few commands and the company firefighters went to work. 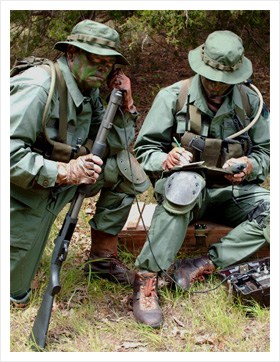 No other COA was even considered unless the initial COA proved to be unworkable. If that did happen, the fire captain would re-assess the situation. He might say to himself, “Huh. Well, this looked like the same thing as the Smith-Martin Company fire…but now I think this might be more like the Old School House fire. Yeah, I remember how we almost failed to contain that fire and we better avoid the mistakes we made back then.” The captain barks out a few new commands and the firefighters adjust their tactics.

In each case, the COA was generated by recognition of the problem at hand—and the solutions used in the past. That’s why this model is called the Recognition Primed Decision model. And this decision-making model is not exclusive to fire captains. We all use Klein’s RPD to varying degrees. So, too, do seasoned tacticians and MILSIM teams.

This may sound somewhat robotic. To be certain there is a great deal of procedure mixed into these drills, but the decision to execute—and which drill to execute is still the prerogative of the team commander.

So which battle drill is suitable for which circumstances? The answer to that comes with considerable experience, frankly. However it is also dependent upon which COA the commander wants to execute. And that brings us back to our original three options: attack, defend, or withdraw.

How do we know which COA is best? The battle drill matrix helps in making that decision. The matrix is made up of three simple questions:

That’s pretty much it. Success is now at your finger tips, as long as you are willing to identify the threats and to rehearse your battle drills.

Some of the art of excellent decision-making will come in time, as each tactician develops their own personal experiences. These experiences are essential to the RPD model in which the commander will recognize the situation at hand and gain some sense of situational awareness. Equally as important is the ability to decide on the proper COA. And three simple questions posed by the battle drill matrix aid in the selection of the best COA.