Drew: What is MILSIM?.

Chris: MILSIM is simply an abbreviation, meaning military simulation. However on a broader scale MILSIM falls under the category of action pursuit gaming—paintball, airsoft, and even “real steel” which are actual firearms that use blanks.

If you look at a broader perspective, action pursuit games could arguably be classified as either speedball or scenario games. MILSIM falls under scenario games and has a specific emphasis on real-world military missions. Compare that to speedball games of capture the flag, or even other scenario games such as PSY-FI alien invasion games and you begin to grasp where MILSIM is quite different than other games.

Drew: So MILSIM is a sport outside the mainstream?

Chris: Oh yeah. That’s a fair assessment—cable television has classified the speedball tournament games of paintball as an “extreme sport” along with skateboarding, skydiving, and surfing. It’s my opinion that MILSIM is every bit as extreme.

The time and space of the playing field sets MILSIM very much apart from speedball. That comment is not intended as a slam on speedball. Speedball is a fantastic sport regardless of whether it’s played with paintball or airsoft—though admittedly it’s far more popular with the paintball crowd.

Drew: Then there is some rivalry between speedball and MILSIM groups?

Chris: Sure, there’s some rivalry, but I think it’s mostly good natured. You’d have to be pretty immature to think your game is better than everyone else’s. These groups are pretty good about recognizing that the focus is to have fun. This may be a “big boy” game, but it’s still just a game. No one could credibly compare themselves to those men and women in uniform who are bravely protecting our American way of life.

Drew: But you do have veterans and actively service members mixed in with the gaming community?

Chris: Oh yeah, yeah. Certainly. MILSIM pulls a significant minority of their players from veterans and even those warriors currently serving. And to be certain, MILSIM is a martial art—the word martial meaning “military”. Of course MILSIM is very different from most people’s perception of Eastern martial arts because MILSIM is team-focused and places very little emphasis on the individual. But sure, MILSIM draws veterans and service members. I’d argue that MILSIM follows the warrior path, or at least continues to develop those warrior skills.

Drew: Okay, what’s the big draw to MILSIM? What do the participants get out of MILSIM?

Chris: The answer to that also requires another contrast and comparison between the similar sport of speedball and MILSIM.

Speedball, for example, requires precisely honed individual field craft. That means the ability to shoot, move, and communicate as an individual and as a part of a team. Furthermore, the battle drills of successful speedball teams are absolutely outstanding! But that’s pretty much where the martial skills end.

We have to look at what the military would delineate as martial skills, and those could be summed up as field craft, battle drills, and tactics. Speedball makes use of only the first two competencies, field craft and drills. MILSIM makes use of all three. 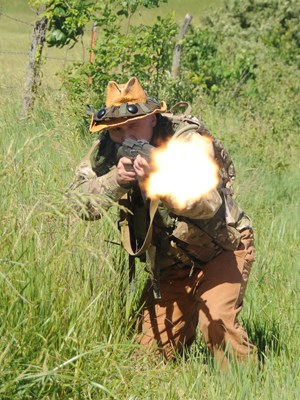 MILSIM can do this because the game takes place on a much larger battlefield in terms of time and space. Tactical skills and leadership development becomes every bit as important as the individual’s field craft or the team’s battle drills. A command group might lead a team of ten players or perhaps as many as a couple thousand players!

This requires hours, days, and even perhaps weeks of planning in order to coordinate resources and synchronize combat power. And since no plan survives the first shot, contingency plans, branches, and sequels must also be carefully considered.

Think of what’s involved. A commander or command staff must analyze the situation and generate multiple courses of action. They then assess each course of action for intended effects, risk assessment, and logistical concerns as they array their forces. Once a course of action is selected, a plan must be written and issued to the troops and subordinate leaders. Then the implementation of the plan must be guided by these leaders. Finally, after the mission is completed, everyone sits down to discuss how they can improve their performance as part of a community of reflective practitioners.

This is really intense stuff! And live simulation gaming like MILSIM is finally being accepted by even academic communities and thinkers. Certainly militaries from around the world have been doing this for centuries.

Drew: I get it. MILSIM players learn how to be leaders. But aren’t you concerned about the violent image it portrays? I mean, why did this game have to model the military and warfare? Couldn’t you achieve the same effect with a non-violent model?

Chris: (Sighs.) Yeah. Okay, let me try to answer that. First, yes it does look violent. I recognize that. But let’s put that into its perspective. When I turn on the TV and watch the football game highlights with the quarterback being sacked in slow motion—feet flying over head and crashing to the ground—that looks pretty violent to me, too.

Drew: True. I’ll give you that, and I appreciate your point. Football and many other sports are pugilistic in nature. They can be very violent as well—

Chris: They look violent. They are not actually violent. There is no malice or intent to actually harm anyone during these sports. If there were, that would be a criminal act. It’s the action of the sport that merely looks violent. And the same is true for MILSIM. But you have to remember that these opponents are actually friends—members of the same community.

And yes, instead of MILSIM we could use a manufacturing plant model or an office call center model. But that’s problematic.

First, what are the overarching goals for a call center? What is the lineage of the leadership’s command? And what models are there for problem solving? These answers are not intuitive and more often than not the actual applications of these issues are muddled and convoluted.

Playing “Army” is far more intuitive—whether such a statement of our society is viewed as good, bad, or indifferent. Got a machinegun nest on top of the hill that’s pinning down the team? Well, the solution is pretty intuitive for anyone who has ever watched a war movie. And the chain of command is pretty simple, too. Linear, yes, but simple.

Second, what does it cost to rent a warehouse and enough power equipment to simulate an actual manufacturing plant? What are the safety considerations and liabilities? Is a call center any cheaper with office space rentals and the requirement of numerous computers linked to a common data bank? The cost and resources necessary for such live simulation can quickly become non-starter issues.

By comparison paintball, airsoft, and even real-steel groups such as military re-enactors are far more feasible. The equipment involved is still very expensive overall, but far less expensive than a manufacturing plant. Furthermore, since military equipment is issued individually, it becomes far more feasible for the individual to make purchases that benefit themselves, their team, and the community.

The last issue is what might be called “sex appeal”. I mean, who’s kidding who? Wargames and all the really cool equipment that come with it have a definite attraction for the adventure seeker. I just don’t think the same could be said for the call center cubical. Call centers are not attractive, not sexy, and definitely not an engaging environment for playing or learning.

Drew: What about the possibility of recruiting a potentially dangerous individual? I mean, isn’t there potential danger for MILSIM in encouraging this type of sport for a person who might be emotionally unstable?

Chris: Yes, there is a concern. Anyone who says otherwise is being disingenuous. The idea of participation by terrorists or even an emotionally unstable individual is a definite concern for the MILSIM community—all MILSIM communities. We have to remain vigilant in watching for this.

I mean, the US military and militaries around the world use wargaming very much like MILSIM to teach the same set of martial skills. So would terrorists want a similar program? Sure they would!

Look at the “Fort Dix Six” terrorist cell in New Jersey this past May, or the 12-man terrorist cell in Toronto, Canada that was broken up in June last year. Both cells reportedly used paintball as a means of tactical training. That’s completely believable.

What is equally important to note is that it is also reported that neither terrorist cell played paintball within a gaming community, on either a commercial or private field. They weren’t taking part in the sport. They weren’t part of the MILSIM community!

Why? Well, because again MILSIM players are a community of friends. They know each other, hang out with each other at their homes, and talk, call, and email each other on a regular basis.

Our notion of terrorists being poor, uneducated radicals is changing. On the contrary, we’re finding that terrorists often come from middle class and upper-middle class intellectual elites. At the same time, we’re also finding that terrorists are loners that shun group participation and have been ostracized from society. In short, the last thing they are willing to do is come make friends within the community of a fun sport!

It’s the same for emotionally unstable people. I don’t know that the Virginia Tech shooter ever even tried to come to a MILSIM game. I’m not making that statement one way or the other. What I can tell you is that he likely would have been shunned as “unsociable” or “unsafe”.

Angry people preaching hate and violence are quickly alienated in MILSIM. They’re shown the door and asked not to return because the community members feel these people give the sport a bad name.

Drew: Okay, so you’re saying that the sport polices itself through the social aspects of the game community. I get that. And honestly, it sounds like a lot of harmless fun—not so different that most other sports. So you’re promoting MILSIM as the next great thing, and a game that has leadership potential?

Chris: Right. But understand that I am not promoting the act of running around the neighborhood, back yard, or public park shooting airsoft or paintball systems! That’s not MILSIM—that’s dangerous. Not only could someone be seriously injured by the projectiles that these simulation systems shoot, but the mere appearance of these simulation systems is very threatening. They look remarkably like real firearms and can fool even an experienced police officer!

I’m promoting a safe gaming environment on either commercial or private land with regulated safety features in force. This involves the MILSIM community’s associations, teams, and commercial vendors—like any other martial art competition.