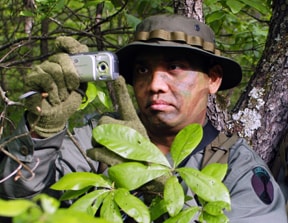 At the end of each year Olive Drab Journal honors members from our community whose actions exemplify the quintessential traits of the warrior, the leader, and the shepherd. This recognition does not come lightly. We look inward amongst our community to identify those brilliant men and women whose leadership and mentorship have been inspirational.

Dr. Ozy Sjahputera’s long and unlikely path led him to One Shepherd in the late 1990s and he continued to serve amongst our rank and cadre until 2008 when his research pulled him away.

Born the son of an Indonesian Navy Captain in Jakarta in 1970, Ozy was introduced to the martial life at an early age. He quickly and adeptly picked up the sport of marksmanship and competed in small caliber air rifle throughout his studies in his youth. Ozy graduated Jakarta High School #4 in 1989. He was selected from 15,000 applicants for only 26 scholarship positions to the USA with the Science & Technology Manpower Development Program (STMDP).

Ozy graduated from the University of Missouri in 1994 with a BS in Computer Engineering, in 1996 with an MS in Electrical Engineering, and then returned to Indonesia. However his desire to continue his education brought him back to Missouri and MU in 1998. It was then that his enthusiasm for competition shooting and his insistence on introducing this pastime to fellow students spurred a chance meeting with One Shepherd. Ozy’s interest was ardent.

As a student member in One Shepherd, Ozy was instrumental at recruiting atypical students into One Shepherd’s training program – ethnic minorities, women, and members from various religious backgrounds that might otherwise have shied away from such an opportunity. Ozy quickly acquired a position as the assistant manager of the Columbia, Missouri chapter by 1999, and it was under Ozy’s stewardship that One Shepherd opened up to student members from no less than eight different nationalities across the globe.

Over the years Ozy continued to champion One Shepherd’s student program. He established a basic marksmanship course, regularly taught firearm safety and maintenance, and he was indispensable when it came time to bridge a relationship between One Shepherd and the Army and Marine ROTC programs at MU in 2006.

Even as Ozy’s research work for the US government began to occupy more and more of his time and pulled him away from One Shepherd’s regular training schedule, Ozy continued for two years to offer one-on-one basic marksmanship mentoring for US Army cadets and Marine Corps midshipmen associated with One Shepherd’s student program.

Ozy completed his PhD in Computer Science & Computer Engineering from MU in 2004. He has served and currently serves on several committees conducting research for the US government and for the Ellis Fischel Cancer Center. Ozy remains an avid NRA master marksman, a certified rifle instructor, and coaches his two young daughters in the sport.

In Ozy we see the best of America – though indeed Ozy is still working toward American citizenship! He deeply appreciates the liberties and opportunities this nation offers, and he’s quick to remind others of that fact. But we also see in Ozy a sincere sense of self-determination and personal accountability. He has overcome seemingly hopeless odds and meets each challenge with a resolve that raises the bar for all others.

For his indomitable spirit, his work within our community, and his research for our nation, it is with great pride that we count Ozy amongst the rank of our Warrior-Shepherds.