The best way to win a gunfight is to train for it. The training regimen is straightforward and follows a banal sequence – firearm safety, basic marksmanship, combative shooting, and finally gunfighting against actual human opponents. That’s force-on-force training.

Force-on-Force (FoF) training is the critical element of gunfighting. No experienced warrior would underestimate or underemphasize FoF training. It completes the gunfighting skill set.

Yes, safety is essential. And through marksmanship we learn to hit our mark, also essential. Through combative shooting we learn to manipulate our body and our weapon within active shooting galleries. But none of these valuable learning environments include the most dynamic variable – thinking, moving human opponents working in teams to kill you! If you’ve never faced this variable then you are simply not prepared for battle.

Can you wait until battle to learn gunfighting? Some warriors do, but that is an unforgiving classroom. Can you imagine a young housewife having to defend her children, never having even so much as aimed a firearm at another human being?

This is where much of the skewed research on private firearm ownership is derived. You’ve heard news media reports claiming that people who own firearms for self-defense are more likely to be victims of their own guns. Well, that statistic is up for much debate. However, I’ll stand by my insistence over years of personal experience and as a weapon trainer that if you plan to carry a firearm for defense of yourself, your community, or your nation then you better follow a deliberate training regimen. And that includes FoF gunfight training.

One Shepherd (http://1Shepherd.com/_programs_courses/ecc.aspx) is a company that offers tailored FoF courses. It is based in Missouri and operates throughout the Midwest with mobile training teams capable of training anywhere in the United States. The vast majority of One Shepherd FoF training employs Multiple Integrated Laser Engagement System (MILES 2000), but also employs gas blowback (Airsoft GBB) professional training platforms for pistol FoF courses.

There are a handful of credible companies in the United States currently offering FoF gunfighting courses. Some are fairly large companies catering to clients nationwide such as Suarez International (www.SuarezInternationalStore.com) that employs Simunition as a training platform; and some are small regional companies such as Specter Tactical (www.SpecterTactical.com) in Connecticut that tailor specific instruction to local clients and agencies. Specter Tactical employs an older generation of MILES that is equally viable for FoF training.

Okay, with the hat tip to our sponsor, and larger training community, it’s time to address some of the more general and frequently asked questions in regards to gunfighting.

Q. What should I take to the gunfight?

We really need to back up here a minute and conduct a little assessment. If you’re going into a situation where there might be shooting involved, the very first thing I’ll insist you need to do is a risk assessment. Ask yourself if it is honestly necessary to go.

If the answer is yes, then plan accordingly. Take too little gun and you’ll spend the entire fight buying enough time and space to look for a bigger gun. I hate getting into a gunfight with a pistol when my opponent has a shotgun!

What’s worse is getting into a gunfight with a rifle when the enemy has tanks. Contrary to what you see on the news, this really does happen on rare occasion. And tanks are scary. You’ll be searching the battlespace for a rocket launcher, and even with a rocket launcher in hand you still end up feeling so incredibly puny fighting a tank with a rocket tube.

This brings up another point. Don’t bring so much gear to the gunfight that you lose the ability to maneuver.

Can’t run, jump over the wall, or swim with all your gear? That might be a problem. If your entire battle plan is essentially to haul enough body armor that you can stand toe-to-toe and duke it out with the enemy, you’re likely to be quickly outmaneuvered. The enemy will simply escape, or move to a more advantageous angle and get the upper hand.

That’s not an argument against the effectiveness of body armor. I’m thrilled to see better technology offered to our warriors. But I’m also skeptical of a silver bullet solution to gunfighting.

Q. How many rounds? Is it one shot–one kill?

A. Are you training as an assassin? Then yes, I can see some logic in that solution. After all, the more bullets and casings left on the ground, the more likely the police forensic team will solve this mystery of international intrigue.

That’s my best guess. I’ve never been trained as an assassin, but I saw a movie about it once.

For warriors – military and law enforcement professionals, security details, and citizens trained in self-defense and tactics, it’s okay to shoot twice. Frankly, you can shoot a whole lot more.

I don’t mean to make light of the possibility of fratricide, collateral damage to civilian non-combatants, or even environmental considerations. Honestly. But there is a certain level of “save your own skin” that plays into the dynamic of gunfighting. Bullets don’t cost that much, and they don’t make good chopsticks. Shoot them. That’s why you brought them. 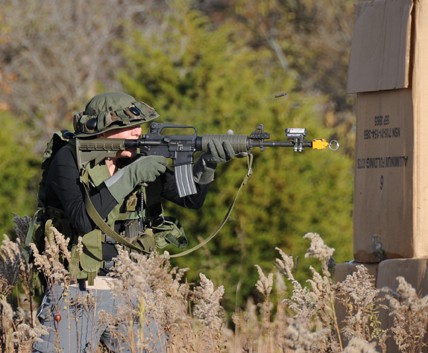 I remember way back in dinosaur times when I was in basic training at Ft. Benning, GA. My combat buddy Larriah and I were shooting what is colloquially called final protective fires. The sound was deafening, so Larriah shouted, “How many times do we shoot the target?” A crusty old range sergeant happened to be within earshot of the question.

“Son, bullets are cheap. You shoot that target until it collapses, gives up, or runs away!” He handed us three more magazines each and told us to fire ‘em up.

I’ve always remembered that advice. In the gunfight, I tend to put about 5 to 15 rounds into every target I engage, usually through a series of hammer-pairs, controlled pairs, or sometimes just good old rapid fire if the target is much further than 50 or 60 meters away.

Shoot until (1) the opponent clearly collapses or starts to fall apart, (2) the opponent surrenders, or (3) the opponent has run away and can no longer be engaged. More commonly, you will shoot until another target demands your immediate attention. Yes, I’m serious.

That’s only half a magazine. You’ve likely still got eight and half magazines left. Do the math. You won’t be shooting more than 18 opponents today.

Q. Which is more important, speed or accuracy?

A. If you ever find yourself in a situation where you have to choose between speed or accuracy – get the hell out of the way! This is not a cowboy action shoot.

Run. Get out of the kill zone. Don’t even think about shooting back, let alone accuracy. Just how accurate do you plan to be when an enemy bullet hits you in the femur bone, rips off a pinky knuckle, and hits your helmet so hard you’re left with a ringing sensation in your ears?

I earnestly don’t care if you’re so fast and accurate you can shoot the train engineer from the hip draw. If you’re standing on the track, that train will squish you! Run.

Get somewhere safe, and then let’s continue this discussion.

Q. Should I shoot on the move?

A. Okay, hold on. Now I take back everything I just said about ammunition being cheap. Let’s make a new rule right here and right now.

Shooting on the move looks incredibly cool on the firing range and, as long as certain safety issues are carefully in place, shooting on the move should be practiced at every possible opportunity to impress attractive women. Beyond that, forget it! No way. Just stop.

Hey seriously for a minute, guys. When shooting at an enemy opponent, bullets are cheap. Wasting ammunition on the move is stupid. I mean, why did you even bring a combat buddy to this fight if he wasn’t going to get set and cover you while you run?

For that matter, re-read the answer to “speed vs. accuracy” above. Run! Get out of the kill zone as fast as humanly possible.

If you’ve got to move, do it so fast that when you stop you scrape your knees. Don’t run as if you were gaining points for style and artistic creativity. And don’t try to compensate for your “Joe Cool” run by shooting your own toe off. We all know you did that because you’re out of breath and you don’t want to run anymore. Totally transparent. Totally lame. Totally.

Q. What are the most advanced firing positions?

A. I’m sure I can’t even name off most of the so-called advanced firing positions. I’ve purged them from memory out of disgust and embarrassment. The Broke-Back Mountain; The Monica Lewinski; Rice Paddy Squat; Tonto with His Ear to the Ground; and White-Trash Sex in the Laundromat. Advanced firing positions have names more lewd and offensive than alcoholic shooter drinks at college spring break.

Here’s an advanced firing position for you. Find solid cover and level your weapon on top of something for steady support. Try not to expose yourself to any opponent just yet.

Now pick just one enemy opponent. If he’s completely exposed to you, all the better. Expose just enough of yourself to him so that you can fire your weapon. Shoot multiple rounds in rapid succession, 2, 4, 6 or 10. Did he fall down? Good.

Your shot worked very well against one bad guy. However his buddies were less than amused by your advanced firing position. And if they have a rocket launcher, you’re going catch that in the teeth in about 20 seconds!

So find new cover. Then repeat the process. Do not stay stationary in a gunfight unless you have your opponent completely pinned and unable to move.

Q. How do you shoot while overcoming the target?

A. I pummel them to death. Well I’m certainly not going to overwhelm them with my insider knowledge of the fashion industry!

Okay, okay. Yes, we shoot at the bad guys when we are assaulting across an objective. I realize that we often fire our weapons while conducting such assaults and closing the last few meters between the opponent and us. But you know, I really think that’s more about making noise to psychologically stun them and disrupt their decision-making process than it is about actually shooting anyone.

At that point the opponent’s adrenaline is pumping a quart a second and getting hit by a relatively tiny bullet probably isn’t going to do much damage fast enough – unless you land one of those golden BB shots to the upper spine. This is a near impossibility. Don’t rely on those odds.

So when closing the last few meters to physically overwhelm your opponent, you’d better be prepared to whack people over the head with your rifle, a kitchen chair, a heavy bucket, the neighbors Jack Russell Terrier, something!

My point is, stop trying to solve all your problems with just one tool. Specialization is for insects. Humans problem solve with a multitude of tools.

To be “decisively engaged” means that you are locked in combat so that you will either win or lose, unless you can momentarily push back hard enough that you can break contact.

Your mindset, then, is the most lethal thing you carry into the gunfight. This is a vicious, violent situation and your ability to ratchet up the violence of action will almost certainly carry the momentum for you to successfully impose your will, or at least buy enough time and space for you to break contact and run away bravely.

Fight the battle in front of you! If you get hit, it will likely hurt. That pain is just nature’s way of telling you that you’re still alive and still in the fight. Everyone is counting on you to win – your combat buddy, your teammates, your family and friends back home. So win.

How? You will need to train. And any serious training regimen will include Force-on-Force gunfight training.