Let me be clear, I am not an aficionado of the Kalashnikov, better known as the AK-47, or more properly the Automat Kalashnikov Modernizirovannyj (AKM). Yet there are countless millions who have been singing the praises of the AKM for the past half-century. It did not become a beloved weapon by accident or mere happenstance. And so it’s time to give this weapon its due.

The Soviet AKM chambered in caliber 7.62x39mm cartridge reached its pinnacle in 1956 for several good reasons. Since its inception in 1947 the AK-47 saw a series of setbacks, poor quality steel on the stamped version, which was corrected with a slow, expensive, and heavy milled version. However, in 1956 the latest version dubbed the AKM once again was using much improved stamped steel, making it lighter as well as cheaper and faster to produce. 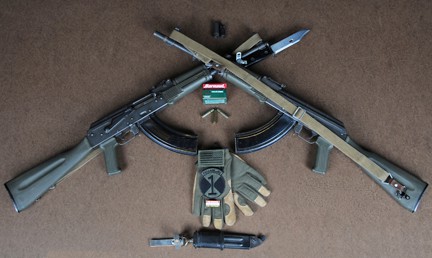 Consider that at that same time the US Army was still using the venerable M1 Garand and the British Army carried the bolt-action Lee-Enfield. Albeit two fine weapons, they were unwieldy at close quarters and held just 8 rounds (Garand) and 10 rounds (Lee-Enfield) compared to the detachable “box” magazine of the AKM holding 30 rounds of ammunition. Furthermore, the AKM had a select-fire capability of fully automatic fire.

While their NATO counterpart’s weapons were certainly more accurate and fired more capably at longer ranges than the AKM, once within its maximum effective range the AKM simply outgunned all others with suppressive fire. This was a decidedly tactical edge in 1956.

The AKM was also smaller and lighter than its contemporaries, giving it further tactical advantage.

At an operational logistics perspective, the AKM was designed to require the minimum in regards to maintenance. And at a strategic perspective the AKM was quick and cheap to manufacture, and simply to learn for even the least disciplined militia.

Now, my personal experiences with the AKM stem from my schooling on the topic at the US Army’s Threat Weapons Course in Ft. Campbell, KY, as well as having carried it in one combat theater and having fought against it in yet another combat theater. I have fairly extensive experience with the AKM on various ranges including close quarter distances and 300-meter KD ranges over medium distances. Arguably my most considerable experience with the AKM has been in tactical training with One Shepherd, as the AKM was adopted in 1992 as our OPFOR weapon for force-on-force training.

So I’ve carried, shot, trained and fought with numerous AKM variants – manufactured by Russia, Romania, Bulgaria, East Germany, Egypt, Iraq, China and the United States. I have my favorites and I certainly won’t make the case that all AKM are created equal. They are not.

Yet there are certain expectations that the AKM will satisfy, and some that the AKM is simply not designed to satisfy. Let’s get specific and dispel some of the myths surrounding this very capable weapon, though I will warn you that I must talk in general terms since obviously there are so many variations of the AKM. I cannot and will not address each and every variant of this 60-year-old firearm. 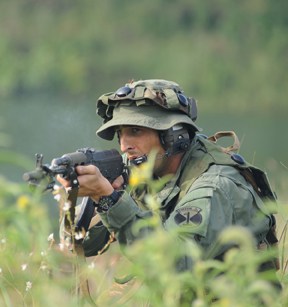 “The AKM will never fail you.”

Well, it fails to function as an effective table saw, so already this statement is too broad to be true. Furthermore the notion that an AKM will not jam in adverse conditions is laughable. Even the best-made AKM will fail to feed, fail to eject, or even experience a catastrophic failure under the worst conditions. It’s a machine. And eventually all machines fail. Especially those not manufactured to an exacting standard or quality.

However, the flip side of that same coin is that in comparison to many other military firearms, the AKM is extremely rugged. It may not go “bang” every single time you pull the trigger, but it can take a beating and with minimal maintenance it will deliver in the fight. They last for multiple lifetimes when cared for even under some of the most rudimentary conditions.

“The AKM bullet is powerful.”

Powerful, yes. The 7.62x39mm round is relatively large and relatively slow, making it well suited for the close confines of battle in dense vegetation and urban streets. Range and accuracy suffer however.

The Kalashnikov round, like the firearm, is plagued with a lack of standardization and quality control measures. The bullet itself is known to have a Measure of Angle (MOA) of 5 inches at 100 meters, which is a bit dismal for modern military weapons.

Yet even in light of this shortcoming, the practical impact is fairly negligible. At 300 meters I maintained 66 percent hits on a standard military silhouette target during rapid fire of 20 rounds per 1 minute. Now I’m no slouch, but neither am I sniper trained nor an NRA master marksman.

This means that even with the considerable bullet drop of 30 inches and a 15-inch grouping (5MOA) at 300 meters, a well-trained marksman could be expected to obtain 50 percent hits at 300, 350, and 400 meters under duress. That’s impressive by any military standard.

Fortunately for our military and our allies, our enemies over the past half-century of conflict have rarely produced such trained marksmen. And never have they achieved such capability as a standard among their warriors.

Indeed, using the 50 percent hit probability as a measure, most militaries armed with the AKM train no farther than 200 meters. This is the furthest range the weapon can be aimed with little regard to bullet drop, and sharpshooters can maintain groupings under 10 inches with well-maintained AKM.

If 200 meters sounds rather paltry, consider that conventional wisdom states 70 percent of all small arms injuries in battle take place at 100 meters or less. In this light, a practical range of 200 meters is very capable, which lends further credence as to why the AKM is so well suited for the close-in fight.

Frankly no. This has not been my experience at all and such a statement demands a qualifier. The AKM is easy to learn, however it’s difficult to use.

The brilliance of Mikhail Kalashnikov’s design is its simplicity. The AKM uses a gas piston system with large moving parts that are simple to maintain. Both the magazine and weapon load easily enough. There isn’t much to learn in the way of “buttonology” on this weapon.

Yet to describe the AKM as ergonomic is a bit pretentious. Not for nothing, but the Kalashnikov weapon predates the modern coinage of the term “ergonomic” by British psychologist Hywel Murrell in 1949.

Case in point, the AKM fire selector is horribly misplaced, forcing the shooter to disengage his firing hand at precisely the moment he should not. The only alternative is to walk around with the weapon on “fire” putting the members of the patrol at considerable risk of fratricide.

The iron sights are nearly impossible to adjust for MOA. The rotating magazine almost invariably requires two hands instead of one to replace. The fore stock is too short causing countless burns from heated barrels. The comb of the butt stock is angled so that the recoil is pronounced and virtually impossible to control the barrel climb on full-auto fire. And parts of the AKM are inexplicably known to fly off in the heat of battle, though in most cases the weapon continues to fire – raising the question as to whether or not such parts are even necessary.

Bloody knuckles and all, the AKM is a formidable battle-axe of a weapon. It’s endeared itself to millions of warriors across the globe.

So there it is. What the AKM lacks in accuracy, range and ergonomics it compensates in power, ruggedness and affordability. Like it, love it, or hate it, you have to respect the Kalashnikov weapon and its 60+ years reign in battle.