“We’re paratroopers, Lieutenant. We’re supposed to be surrounded.” – CPT Richard “Dick” Winters at the Battle of the Bulge

Of course, this is not what we mean when we say “caught behind enemy lines.” This expression refers to those cases when our troops unintentionally find themselves behind enemy lines – be it the result of a delaying force conducting retrograde that was cut off from their retreat; or an attacking force that simply pressed too far ahead for the overextended main body, reserves and logistics to keep pace.

Thus, while CPT Winters’ comments at the Battle of the Bulge are admirably stoic and even border on heroic, the situational assessment of the young armor officer, to whom CPT Winter’s was speaking, was probably more accurate. The US paratroopers had not been dropped into Bastogne. They walked. And the German Army was rapidly enveloping them.

Whatever the cause, being isolated behind enemy lines is a perplexing situation as well as a considerably dangerous place to be! Behind enemy lines friendly logistics are hard pressed to re-supply your force on ammunition, water, batteries, medical supply or evacuation, or even achieve something so mundane as to feed your troops. Things could get desperate, quickly.

Furthermore, the enemy is bound to outnumber you, and if they haven’t discovered your force yet, they likely soon will. Time isn’t on your side.

If this doesn’t sound bad enough, realize that linking up with friendly forces isn’t as simple as just surreptitiously maneuvering across the battlefield to some imaginary line on a map. Oh no, some friendly unit somewhere close by just took a mauling. Think about it. If that wasn’t the case, your unit probably wouldn’t be stuck behind enemy lines right now.

So merely waltzing up to the good guys and saying, “Hey it’s us. Red rover, red rover, let us come on over” isn’t going to cut it in middle of a violent melee or its immediate aftermath. That’s a good way to get killed by friendly fire. The troops are nervous and probably ready to shoot the first target they encounter. You have to approach with a healthy amount of careful coordination.

But the news may not be all bad. You’ll have to take a quick assessment of your situation and look for opportunities to emerge.

Frankly, if you’ve just been cut off in the last half hour or so, and are in close proximity to your line, listen to the battlefield. You are likely not out of ammunition yet. You have an opportunity to strike the enemy from a direction for which they are simply ill prepared. And the defeat of an enemy force may very well create an opportunity for you to link up with friendly forces.

Be careful here. Remember that the friendly line will be shooting direct fires and indirect fires back at the attacking enemy force. If you get in too close to their formations, you’ve become a target for friendly fire – and they almost certainly don’t realized that your small force is mixed in with the enemy. You could wind up on the receiving end of both friendly and enemy fires simultaneously.

On the other hand, if you play it too far back you won’t be able to significantly contribute to the fight. The idea is to position your team so that you can place punishing fires on the enemy at key points in their assault – against the rear of their support section, or on the flank of their breach team. A hard hit against one of these teams might very well sway the balance of the fight.

When the enemy is repelled and falls back off the objective, you must make your team’s presence known at the first available lull in the firing. Again, expose yourself too quickly and you’ll be mistaken for an enemy force. Wait too late and both forces may have maneuvered so drastically that you’ve become lost again.

It is critical that you do not attempt to reenter the friendly lines during an enemy attack on the friendly unit! Again, that’s just too much coordination for the unit under attack to bear. It will end disastrously, regardless of the best intentions.

If you are not in the immediate vicinity of friendly forces, the opportunity to slip back into friendly lines may be more difficult. In fact, you may already be surrounded by enemy forces. This situation dictates that you almost certainly have to slip away during periods of darkness.

Truth be told, the same information is required to reenter the friendly line during daylight hours, but since visibility is an advantage in daylight, the coordination is much easier. And the friendly troops are a bit less nervous.

If you can pull it off at all, reenter the friendly line during daylight hours.

Using either speed or stealth, or a combination of the two, maneuver to the determined location of the friendly line. Immediately offer the far recognition signal in the manner prescribed – i.e. pop a color smoke, waive a color panel, or flash a color light lens – and wait for the friendly force to authenticate the color. Once they’ve done that, send a small link up team to render the near recognition signal as prescribed. This is usually a numbered challenge and password.

Once the link up has been achieved, a security team needs to collect or wave in the remainder of your team. Each member is counted in by name to demonstrate that everyone is recognized on the lost patrol.

But what if you have no communications with the friendly forward line (FFL)? What if you must evade the enemy while crossing a large engagement area – “no man’s land”? And what if local friendly forces are unaware that your unit is cut off? 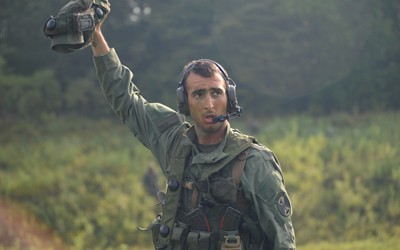 Okay, this is the worst of the worst case scenario. It’s definitely not a desirable situation to be in, and so I’m going to suggest the only solution I can think of. Surrender.

No, not to the enemy! Surrender to your own friendly forces. You may need to cache your weapons and equipment nearby for later retrieval. Select the most inconspicuous path toward the FFL and move carefully toward friendly forces. Once you’re team is within sight, select a small team to stand up and wave the white flag of surrender – white under pants, a t-shirt, several pairs of white tube socks. Oh heck, it doesn’t even have to be white.

The important thing is to wave something during hours of excellent visibility so that the friendly forces can see that you are unarmed and attempting to surrender. Once they understand this, the battle is half over for you.

Yet remember that if your team is exposed in a particularly large engagement area, you are also vulnerable to enemy fires. You need to get your team out of the engagement area as quickly as possible, while making it clear to the friendly forces that you are surrendering.

Again, linking up with the FFL from the enemy side of the engagement area is daunting at best, and should be done during daylight hours if at all possible. Careful communication and coordination must be implemented. In lieu of this solid advice, simply surrender to the good guys.

Hey, humiliating as it is, it’s much better than the alternative – surrendering to the bad guys!