The brilliance of Carl von Clausewitz’s essay Principles of War (1812) is that his words are as relevant today as they were 200 years ago. This work places Clausewitz, along with Sun Tzu, as one of the most quoted military philosophers of all time.

Jomini, a Swiss officer, fought under Napoleon Bonaparte. From the French and Swiss military traditions we might guess that Jomini would be more descriptive in his approach to military philosophy. Not at all. Instead, the able Jomini takes a very prescriptive approach, giving specific guidance to the array of combat power, the formation of troops, and how, when and where artillery is to be employed.

As such, Jomini’s observations were extremely relevant to the tactics and technology of his day. Indeed, one could argue that if we were to attempt to extract the underlying principles of Jomini’s prescriptive guidance, his philosophy would still be relevant. Perhaps.

Clausewitz, by comparison, was a Prussian soldier who eventually obtained a commission as an officer (championed by junior ranking warriors for having started his career as an enlisted troop). Clausewitz fought under the Russian banner against Napoleon’s Grand Army.

Additionally, this article will follow the pneumonic memory device of M-O-S-S M-O-U-S-E. There are other ways to order the nine principles but in fact each principle is equal in value, and so a specific ordering of the principles is irrelevant. MOSS MOUSE will do.

Mass combat power at the decisive place and time. Coordinate, synchronize and harmonize combat power where it has a decisive effect on an enemy force in the shortest amount of time.

We mass all aspects of combat power – not merely the concentration of troops. The effects of crew served weapons, indirect fire, close air support, maneuver assets and even intangible considerations such as situational awareness can enable numerically smaller forces to win decisive victories!

Yet there are obvious dangers in massing. Our massed troops make an inviting target. Quick, violent acts limit the amount of time our troops are exposed to enemy fire while massed.

In simple tactical terms, mass combat power at one decisive point along the enemy’s formation. Do not attempt to attack all the enemy at once, everywhere! This exposes more of our troops to the enemy’s fire. Focus on breaching the enemy line and exploit that breach immediately. 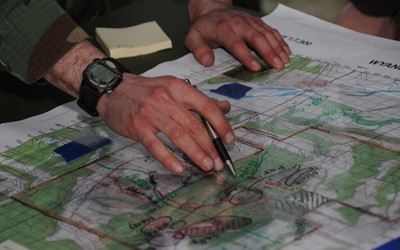 Without an assigned objective, teams are left without clear pictures of what they are suppose to achieve. In effect, they are useless, emasculated.

Keep in mind that the goal of warfare is to impose our will upon our enemy. Without a clearly defined objective, subordinate leaders and teams are left asking exactly how to achieve this.

Never allow the enemy to gain an unexpected advantage. Yes, the enemy most certainly will have a set of advantages. This is inevitable. But we can mitigate known advantages, if nothing else than by avoiding them.

Situation awareness is a form of security. We must clearly identify and express the enemy’s most dangerous course of action (COA) and their most likely COA. This implies that we understand well the enemy’s capabilities, too.

Elusiveness is another form of security. We can achieve elusiveness through mobility speed or stealth. Either method makes it very difficult for the enemy to target our troops.

Security means force protection. And while any friendly COA involves an element of risk, security measures mitigate our vulnerability to hostile enemy counteractions.

Strike the enemy at a time or place or in a manner for which he is unprepared. Surprise does not always mean to startle the enemy, though that is certainly acceptable.

Surprise can come in the manner of which we attack – that is the violence of action (VOA) and momentum achieved. If the enemy is ill prepared for this, VOA can decisively shift the balance of power on the battlefield.

Surprise can come in the time and place of our attack. If we attack from a time, direction or location for which the enemy is ill prepared, again we can achieve surprise. Deception such as a feign attack goes a long way in confusing the enemy as to the location of our decisive attack.

Surprise can come in the tempo of our operations. If we pulse our attacks continuously over a duration of time for which the enemy is ill prepared, we can achieve surprise. Unable to keep up with the resources required for a quick and continuous tempo, the enemy will yield.

Surprise is most commonly achieved through speed or stealth, followed by a particularly tenacious attack.

Gain and retain maneuver to place the enemy in a disadvantage. Maneuver is the flexible movement of forces within the battlespace.

Effective maneuver keeps the enemy off balance and protects the force. Maneuver exploits success, preserves the initiative, and reduces our vulnerability to enemy targeting and fires. The effort is to continually pose new problems for the enemy by gaining a new direction of attack, eventually leading to the enemy’s defeat.

The lesson here is not to get bogged down, bunker down, and lose the momentum. If you do this you invite the enemy to outmaneuver your force, and they’ll seek the advantage of a better attacking position. Avoid this! Instead, gain and retain maneuver.

Gain, retain and exploit the initiative. Offensive action is the only way to impose our will upon our enemy. We defend only long enough to accumulate combat power and we then immediately go on the offensive again. 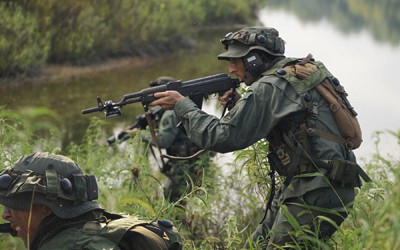 Offensive operations are the means by which we gain and maintain momentum. Momentum allows us freedom of maneuver and ultimately decisive victory.

The defense has its application, as spelled out above. However the mistake to avoid is the notion that we should sit still and wait to see what happens next. That only gives the initiative to our enemy, and soon we’ll be reactive instead of being proactive. That is the opposite of momentum.

Tactical leaders must gain, retain and exploit the initiative by seeking the offense.

One commander for each operation – there can be only one!

Let us look at historic US examples of so-called “assumed exceptions” to this rule:

Operation Eagle Claw, Iran, April 1980 – multiple Special Operational Forces (SOF) meant multiple commands. Two aircraft crashed into each other at the beginning of this failed rescue mission; the result of two SOF commands not talking to each other. No unity of command.

Operation Gothic Serpent, Somalia, October 1993 – one conventional force and two SOF units meant three separate commands. The result was a poorly coordinated grab mission that resulted in the tactical defeat of two of America’s premier SOF units, as well as the strategic defeat of America’s objectives in Somalia. There was no unity of command.

Operation Anaconda, Afghanistan, March 2002 – one conventional command and two SOF units meant three separate commands, again not communicating effectively. The result effect was that more than 6,000 foreign terrorists successfully held up the US forces for weeks while they bought time and space for the bulk of their force to escape into Pakistan. Some believe Osama bin Laden was in the Shahi-Kot Valley during the beginning phase of this operation. No unity of command.

For every objective, seek unity of command and unity of effort. Unity of command means that all the forces fall under the authority of a single commander. This commander has the requisite authority to direct all forces in pursuit of a unified effort. Vary from this wisdom at your own peril.

“Keep It Simple, Stupid.” Otherwise known as The KISS Principle that states the more complex a plan is, the more certainly it will fail.

The objective of battle seems simple enough – beat the opponent’s brains out. But once you’re in the ring, the fight begins to look very complicated indeed! What was previously an impressive and complex plan before the fight begun, now looks hopelessly unachievable.

Simple plans and clear orders reduce confusion. Simplicity is not flashy or sexy, but it gets the job done time and time again.

Focus the bulk of combat power at the decisive point of engagement. Safeguard this power greedily when allocating assets to shaping and sustaining missions.

Economy of force is the careful distribution of combat power. While no subordinate unit should ever be left without purpose, the allocation of available combat power to secondary tasks such as feign attacks, blocking delays, or even enveloping forces intended to fix the enemy in their escape routes must be measured in order to achieve mass at the decisive point and time.

Commanders and staffs need to ask themselves a simple question – “What is the most important part of this plan?” Then allocate as much combat power as possible to achieving that objective.

And there it is.

Some 200 years after Clausewitz penned the Principles of War, they are still relevant throughout the full spectrum of operations, and at every level of warfare – strategic, operational, and tactical.