Let’s begin by separating planning from decision-making. Though clearly related and even intertwined, it helps to think of these as two distinct processes.

Planning can be found in Troop Leading Procedure (TLP) and its parallel build, the Military Decision-Making Process (MDMP). Decision-making is also very much a part of these two processes, but this topic has been discussed in a previous ODJ article (see “Decision-Making” 1 November 2007).For this article then we will focus on the process of developing a mission plan at the small unit level – small unit defined for our sake as being those units without a battle staff, expressly the company, platoon, squad and fireteam.

When there are only seconds to plan, both planning and decision-making combine in the OODA loop – Observe, Orient, Decide, Act. This is the realm of Immediate Action (IA) battle drills. Battle drills are not planning, per se, but as discussed in the earlier article are instead a sort of micro tactics that are the building blocks to the larger tactical scheme of fire and maneuver.

Frankly, with just seconds to spare there is no time to develop any plan; thus the use of the word “immediate” in IA battle drills. 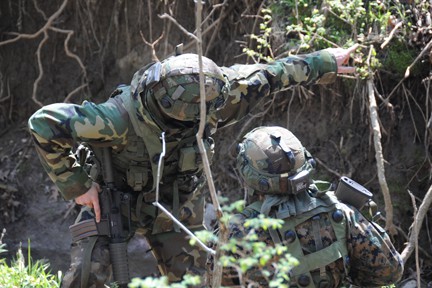 Through the OODA loop we see instantaneous planning and decision-making unique to battle drills. Again, the Recognition Primed Decision (RPD) process championed by Dr. Gary Klein and Associates comes into play. RPD combined with the question sequence of the Battle Drill Matrix (BDM) are powerful tools for accessing our own experiences to select a single, appropriate plan – one of our rehearsed drills. We see planning and decision-making intersect in just seconds.

Observe the initial act of instigation. Orient on this phenomenon to determine exactly what it is. Decide on a course of action (COA). Take action!

Once you have taken action, you will need to immediately observe your sector of engagement to see if your COA had the desired effect. And the system repeats itself until you’ve either achieved the desired outcome, or you’ve moved to safety. The repetitive nature of this model is why it’s called the OODA loop.

The quickly changing dynamic of the battle space means that more often than not our small tactical units must plan on the fly, given just minutes to form a COA.

Planning, or COA development to use the military vernacular, employs the “one-third: two-thirds” rule. That is, only the first third of the time allotted prior to mission start is used for planning. The remaining two-thirds of the time must be allocated to the issuing of the Operation Order (OPORD), rehearsals, and Pre-Combat Checks and Inspections (PCC/PCI).

So, you’ve got one hour before your mission begins? Then you have only 20 minutes to plan! Such is the nature of small unit tactics. As we say, “Embrace the Suck.”

Now there is so much to mission planning that it is nearly impossible to cover in a dozen articles, much less one. However, when there are just minutes to plan, experience dictates that a generic approach works best.

Identify the problem. If you were standing on the dockyard at Pearl Harbor on December 7, 1941, the problem is pretty clear. You’re under attack from the air.

Generate possible solutions. Call it intuition or perspective, but you’ll begin to generate possible COA based on your experiences and training. If you are a naval gunners mate then you’re probably thinking of manning a weapon system to defend the skies. If you’re a fireman then you’re likely thinking of fighting the fires. In either case, with minutes to plan you start to think in terms of resources – what’s available, who can help, what priority needs work first, and how best to array those resources to respond to the situation.

Compare the alternatives. Frankly, this most commonly happens as you talk or think through the possible solutions, and rarely occurs as a separate third step. But that’s okay. It is actually happening, and you’re accessing your own experiences as well as assumptions of specific actions and the likely outcome. This is triage. What objective has the highest priority versus what can we actually achieve now, with our available resources?

Make a choice. You have to answer that last question. You have to set into motion your plan by communicating it to others.

There are two mistakes to avoid here. One is to fail to plan at all. If you have the time, use it! The other mistake is to use nearly all of your time planning, and then hope to convey your plan in just 2 minutes with no rehearsal and no inventory of functioning equipment and supplies.

Alright, you’ve been given a mission that will start in less than five hours. The one-third: two-thirds rule gives you an hour and thirty minutes to plan. What’s going to happen here is a truncated, abbreviated Step 2. Mission Analysis and Step 3. COA Development from the 8-step process of the MDMP. 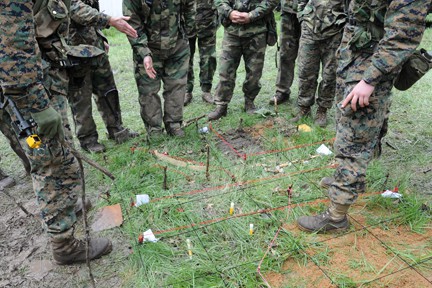 In the mission analysis phase we first gather our input products first. These might include a higher-level Warning Order (WARNO), Operation Order (OPORD), or staff estimates from the brigade or battalion battle staff officers. With an eye on developing our own OPORD nested within the mission of higher command we begin to ask, “what do we know” and “what must we assume” about this mission?

We need to understand the problem, that is, our mission statement. Hopefully that comes from higher command! But in some rare cases, it must be assumed based on the given situation and our specified and implied responsibilities. (Think back to that fireman or gunners mate at Pearl Harbor.)

In most cases we will have an OPORD from higher command. If so, we look at the mission statement, commander’s intent and commander’s guidance for constraints and restraints regarding the Mission, Enemy, Time, Terrain, Troops available and Civilians on the battlefield (METT-TC). We assessed the Intelligence Preparation of the Battlespace (IPB) for enemy capability and positions, plus the lay of the land – Observation, Cover and concealment, Obstacles, Key terrain, and Avenues of approach (OCOKA). And we determine the enemy’s most likely COA versus the enemy’s most dangerous COA.

Each of these considerations above become an output product of mission analysis for our own OPORD – IPB, Mission Statement, Commander’s Intent, Commander’s Guidance – keeping in mind that we are nesting all of our products within the mission, role and responsibility of the higher command, the larger unit to which we belong.

In the second phase, COA development, we also consider input and output products. We have just created the input products in the earlier analysis phase, and so we again refer to our newly developed IPB, Mission Statement, Commander’s Intent and Guidance, plus the enemy’s most likely COA and enemy’s most dangerous COA.

Now we need to develop the output for COA development. This involves a careful consideration of our combat power relative to the enemy’s combat power. Who has the longer-range weapons? Faster firing weapons? Mass casualty weapons? Greater number of troops? Better-trained troops? And who holds the superior terrain and/or staying power regarding logistics?

We then array our forces to mitigate the danger of the enemy’s combat power. Remember, we don’t need to outnumber the enemy everywhere – but instead only at the point in which we will engage the enemy decisively.

Wrap it all together using a basic concept sketch as an overlay to your IPB. The IPB is most commonly expressed as a series of graphic symbols that include fire and maneuver control measures laid over a map.

You’ve just developed a COA, or mission plan. Theoretically you develop at least two distinctly different COA and wargame them separately to analyze and compare the assumed outcomes. However, with just an hour and a half, it is more realistic to say that you are simultaneously building one COA while eliminating multiple other COA under an assessment of which plan is more feasible versus which plan will more likely achieve success.

Hopefully you’ve worked with your more experienced subordinate leaders to develop this mission plan. There is no sense in developing a complex plan in a vacuum unless that is your only option!

In any case, you must now “fill in the blanks” for paragraph 1, 2, 4, and 5 of the OPORD. Your selected COA becomes Paragraph #3 Execution of that same OPORD.

In this way, you’ve adhered to the one-third: two-thirds rule to mission planning development. And you’ve created a COA that lends itself to a credible, useful OPORD for your team in just an hour or more, leaving ample time to issue the OPORD, conduct a rehearsal and Pre-Combat Inspection (PCI) prior to start of the mission.

That’s what I’d call gaining a leg up on success. As a final word of caution, I’ll insist that you don’t become so enamored with your own plan, so wedded to it on basis of pride that you cannot remain objective or flexible. Remember that reconnaissance is an on-going process that potentially will throw significant changes into your COA development and OPORD. The enemy also gets a vote, and Mother Nature gets a vote. That’s life. Embrace the suck.