“There is no better than adversity. Every defeat, every heartbreak, every loss, contains its own seed, its own lesson on how to improve your performance the next time.” – Malcolm X

The US Army has used the After Action Review (AAR) since the end of the Second World War, although this process did not become institutionalized within the Army until the onset of the National Training Center at Ft. Irwin, CA in 1981. Notably, the AAR achieved the rare feat of instantaneous and unanimous hatred.

The AAR was despised by all. Battalion commanders, late-career lieutenant colonels, left the AAR tent in tears. Captains got into fistfights with senior NCOs in middle of the AAR process. 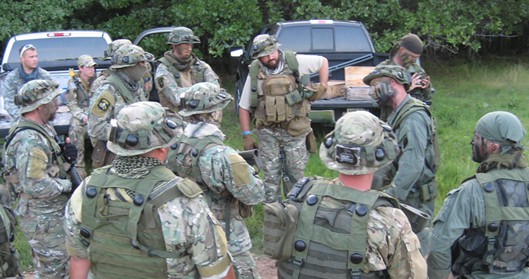 The AAR process seemed doomed to rejection, and yet today it would be very difficult to think of any military training program that didn’t incorporate the AAR process. It just required a little time to adjust our attitude toward criticism, and develop a culture around the AAR.

Let’s be clear, no one likes to fail. No one. And having another professional – a supervisor, subordinate or peer point out our failures publicly is humiliating. It humbles us as warriors.

If that is all we intend to achieve, to humiliate fellow warriors, then let us never employ the AAR again! If we are seeking blame, then lay blame. Don’t bother with anything so academic or constructive as the AAR. If it is blame we are seeking, then let’s wallow in the muck of despair and depraved, vindictive wickedness.

For the AAR is an exalted tradition. It is not about blame – instead it is about redemption.

Accordingly, if it is a process-oriented team-building performance enhancement we are seeking, then the AAR can get us there. We must embrace humility and remain diligently focused on redeeming our performance as a team.

The AAR follows a simple but effective four-step process. When available, a facilitator from outside the team is employed to regulate the flow of the AAR.

In this step of the process the leader – defined as the individual responsible for developing Paragraph 3. Execution of the Operation Order (OPORD) – briefs the plan.

What normally happens at this point is that the leader begins back-peddling, or rationalizing his plan, or the leader may attempt to explain what did and didn’t go to plan from his perspective. This is understandable because the leader pours considerable time and effort into the plan, and feels that he should offer some insight into his thinking. Perhaps that might help.

Do NOT do this! Do not allow the leader to rationalize, explain, or even discuss what happened during the execution phase of the mission. The plan is the plan. The leader only discusses the planning phase at this point of the AAR.

This is important because the plan must be kept separate from the execution in discussion. We will invariably see that the plan does not perfectly match the execution phase of the mission, and the entire AAR process is focused on the gap between the plan and the performance!

So don’t discuss the performance at all. Not in the first step of the process. This cannot be overemphasized. The leader briefly explains the plan, and only the plan.

Now also watch other team members for a specific reaction when the leader is explaining his or her plan. Often enough, we will see confusion on at least one persons face during the leader’s explanation. Some troops might even interrupt the leader or turn to one another and say, “Really? I didn’t know that was part of the plan.”

This is critical, because it might very well mean that the team is experiencing a problem with the communication of the plan – regardless of how valid the plan was or wasn’t.

Once the leader has given a brief explanation of the plan, the AAR facilitator opens the floor to the second part of the process, the discussion on the performance of the mission.

A simple technique is for the facilitator to ask, “Is that the plan everyone understood before the mission began?” This will almost always get the discussion rolling.

Can the leader take part in the discussion on performance in the field? Yes. Absolutely and the leader’s input is encouraged. But there is one caveat; the leader should not attempt to defend or explain his plan.

Instead, it is good practice to have the leader participate in this discussion of the team’s performance by asking questions rather than making statements. The point here is for the leader not to be confrontational, and not to defend his or her actions.

What happens during this discussion is that we find the age-old Clausewitz axiom still holds true, “No plan survives the first shot.” There will inevitably be a gap between the plan and the performance. More shocking still, sometimes the gap is a positive gap, meaning the team does far better in performance than anyone expected. There are lessons here, too.

At this point in the discussion the normal human tendency is to begin to explore what caused the gap between the plan and the performance. What issues gave cause to that gap?

Sometimes the issues are immediately apparent. If team members are saying, “I didn’t know that was our plan” during the first step of the AAR then it’s pretty obvious in the third step, the issues, that communicating the plan didn’t go so well. Now we have to determine why.

Sometimes the issues aren’t immediately apparent. This takes some brainstorming as a team. It means being brutally honest, even when it’s painful to do so. Redemption can only be achieved through candid reflection and accounting of our performance.

Once we have identified the issue, we need a fix. Let’s be very clear here, the fix is not some obtuse comment to the sum of “oh, I guess I shouldn’t do it that way next time.” Nope. The fix is achieved with an assigned name and date/time due.

It is sometimes the case that we don’t even know what the fix will entail. But with an assigned name and date/time due we can still rest assured that we will address the issue. For example, if the issue is a radio procedure that breaks communication security (COMSEC) then we can turn to the team’s RTO and say, “Corporal Espinoza will have a fix for this issue at 0900 Friday morning.”

Until we have a fix in place, we have not addressed the issue. Merely complaining about the issue is not a fix. Don’t assume that it has been addressed simply because we all agree.

Will we always agree on the issues and fixes? No. Consensus is good, but not required. If the leader is satisfied that this is the correct issue and fix, so be it. It will soon be put to the test again, and the leader is ultimately responsible for the success of the mission.

Do all issues require improvement as a fix? No. Fixes come in either an identified need to improve a deficiency, or an identified success to sustain. Fixes can be either an “improve” or “sustain”.

We must not be afraid to take account of our successes, too. This is prudent and wise.

What the AAR is not…

In our enthusiasm for performance enhancement the US military has culturally embraced the AAR process. Yet the term “AAR” now generically refers to many forms of feedback. Regrettably this causes more harm than good.

The AAR is not a “hot wash”. The hot wash is a viable feedback function by which an assigned Observer-Controller (OC) in the role of either a mentor or facilitator offers their perspective to the team. This perspective comes most commonly in the format of “three up, three down” – meaning the OC offers three issues the team needs to improve upon and three issues the team needs to sustain. And again, the hot wash can be a valuable form of feedback. But the hot wash is an external perspective, outside the team. It is not the sort of tradition of reflective practitioner that the AAR offers.

The AAR is a process-based performance enhancement tradition. It is achieved internally to the team and requires a candid reflection and inventory of our performance as compared to our plan. Yet we must also be diligent in keeping this valuable tradition of feedback from becoming a blame-game intended on humiliating fellow warriors. If the AAR turns to this, it will fail in its purpose. That purpose is the redemption of our team on our path to excellence.