I find myself watching videos on YouTube again. Most of the time it points me towards videos of firearms training or competition. Not surprising since that is one of my interests. I’m always amazed how proficient the top competitors are. Whether it’s IDPA, IPSC, or 3-Gun, I usually end up finding videos where my jaw hits the floor. The speed and accuracy they are able to achieve is absolutely mind-boggling. As an occasional competitor myself, I can certainly appreciate the level of training and dedication it took to get where they are.

The tactical trainers are just as impressive. The biggest difference of course, is they generally demonstrate their skill while wearing more practical and tactical equipment. There are no race guns; no special shot shell loaders – just practical firearms and equipment.

There is something amazing about watching a Steel Challenge shooter hit 5 plates scattered about in just a few seconds. Watching guys decked out in full armor punch out of a vehicle blasting an array of steel targets while flash-bangs go off is just down right cool.

However, what I like about these videos is also what I despise. Is this what the peak of firearms training looks like? Well, why shouldn’t it be? These people are international champions – quite literally Grand Masters at what they do. The tactical trainers are often combat veterans, guys who have been there and done that. Of course we can learn something from them. But to what end?

If competition is your bag, then its obvious that path of training will lead you to a level of marksmanship and speed unlike any other game in firearms. Yes – game. I don’t mean that as a pejorative. Not at all. Really. It’s perfectly okay to be a professional baseball player. Why shouldn’t it be okay to be good at a game involving firearms? 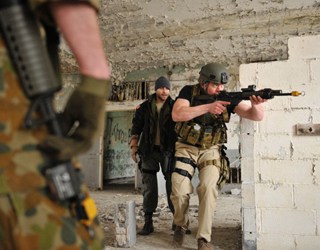 I know what some of you are thinking. I agree that there are skills that can be learned from competition that can apply to a real world gunfighting situation. However, it’s not difficult to see that its a game. First, there are rules. The targets don’t shoot back. They behave predictably. The majority of the time, the competitor is allowed to walk the course. They get to know where all the targets are, where to stand, what target activates movement on another target. They get to plan their round count and at exactly which moment they will reload. It’s fairly clear this a game.

Now the tactical trainers seem to approach things a bit differently. Most of what I’ve seen focuses around a series of drills. Drills aren’t bad. Drills are good. They allow us to refine those tactile skills necessary to become a good shooter. But again to what end? It seems as though most trainers would have you believe that their culmination exercise or evolution is the moment where the purpose of their training becomes clear. Is it? By no fault of their own, most customers are led to believe so.

I’ve seen too many videos in which a shooting skill is applied by placing the shooter in a scenario where they are told to conduct a battle drill – without ever explaining the purpose of the battle drill. Neither do they explain the decision matrix. In short, they don’t tell the shooter why they are there or what they must assess.

Unfortunately, the result is a shooter who has a warped understanding of gunfighting and patrolling. No one second guesses why they are to engage and advance towards an overwhelming force of paper and steel targets in the middle of an open field all the while transitioning to pistols and clearing malfunctions with only the non-dominate hand. That is a poor tactical decision and is not an accurate representation of a gunfight at all.

I’ll suggest that is analogous to teaching someone who knows nothing of baseball how to hit a grand slam one-handed in the last inning of the World Series. It’s absurd.

In the shooting scenario above, wounded and hopelessly outgunned, my battle buddy and I would break contact and seek a new angle of attack. Anyone who would think otherwise is a grossly irresponsible leader that I wouldn’t follow. Don’t try to sell me a highly specialized skill as if it were a standard skill set of gunfighting.

Don’t get me wrong. I am not implying that instructors are intentionally negligent or malicious. For them, I imagine it is the best way they know to push shooting skills to the point of failure. It makes sense to create a high stress environment to test student manipulation skills and marksmanship. Yet unknowingly these instructors are providing a severe disservice. Students may walk away with unreasonable expectations of such unorthodox skills.

What is needed is a better contextual understanding of where and how these skills might apply. In order for that to happen battle drills need to be taught and understood – immediate action battle drills like hasty attack, break contact, and react to ambush. The problem is, that doesn’t sell.

People come to shoot their rifles. Most of the training is done in a classroom setting and square, one-directional range. In the “wowee” appeal of stress shooting, students are left with a unrealistic idea of gunfighting and tactics in general.

It is said that amateurs worry about tactics, while professionals worry about logistics. I think there is something to that sentiment.

If we concern ourselves only with weapon manipulation and shooting skills, an admittedly a small percentage of warrior tasks and competencies, then we’re fooling ourselves. We’re putting people in scenarios without any regard for contextual understanding. As instructors we’ve then failed our students because we’ve established unrealistic gunfighting expectations for our students without teaching the warrior competencies of situational awareness and decision-making.

Always ask why. If your instructor cannot explain the context of the problem and its decision points – its time to find a new instructor.